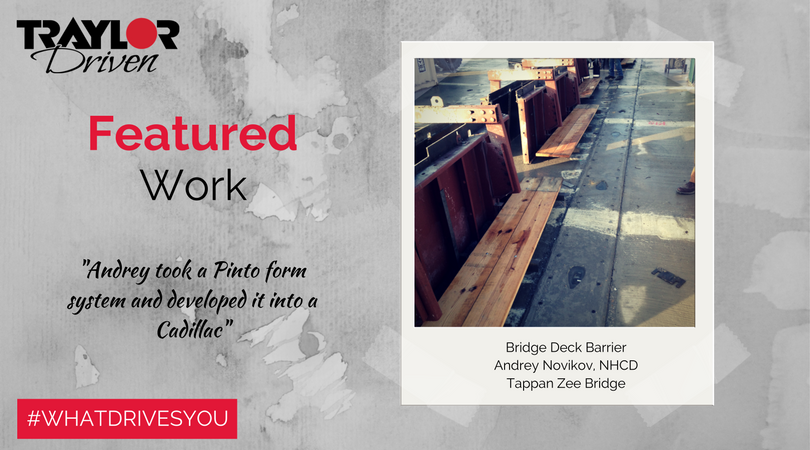 On a typical bridge job with a quantity of 60,000 LF of bridge deck barrier, the work would normally be performed using a slip forming subcontractor. However, at the Tappan Zee Bridge, several constraints such as environmental, concrete durability, and schedule prevented us from moving forward in that manner. Instead, we decided to construct the barrier concrete by conventional hand forming methods.

In order to meet the project requirements, the team needed someone who was going to be innovative and aggressive with the schedule. Andrey took a Pinto form system and developed it into a Cadillac. First, it was taking too long to clean the forms, so he developed a cleaning tool that sped up the process. Second, the chamfer strips on the forms, which were broken in two pieces, were taking two hours to adjust. Andrey modified the chamfer strips into a single piece, reducing the time to adjust by 50 percent, and only requiring one person to do so. Third, he was worried that during the winter months slippery conditions would expose his crew to a fall. To eliminate this issue, he created access platforms to attach to the back of the forms. Finally, Andrey experimented with his setting equipment options, decided that the forklift did not provide enough flexibility, and opted to use the rubber tire excavator.

“I could go on and on about the many innovative things Andrey has done on this project. The barrier work is just one of many examples. Andrey is one of those guys who is not satisfied with the status quo. He is driven to improve and innovate to make the job easier, more productive, and safer.” – Julio Chicas, Tappan Zee Bridge

TBI: Tell us about your role on TZB and what specifically you’re enjoying about it.

Andrey Novikov (AN): I am working on building barriers on the Tappan Zee Bridge. We have a great group of craft guys that enjoy building this 12-mile feature. I enjoy the fast paced environment and challenges that every day brings as we try our best to stay on top of the game. The best part is seeing a cloud of dust behind us spans are completed.

AN: When I am not working, I enjoy spending time outdoors and traveling. I am trying to take advantage of being on the east coast and visit as many places as I can. So far, I have traveled to Boston, Maine, Vermont, Philadelphia, Canada, and Greece.

AN: My biggest driver is working with some of the most talented people in the industry building an iconic bridge that will last over a century. This job is challenging, but it also brings the best out of people and allows us to think outside the box and come up with innovative ideas, which embodies our Traylor culture. We have a strong sense of camaraderie among team members that allows us to count on each other’s help and take pride in our work.