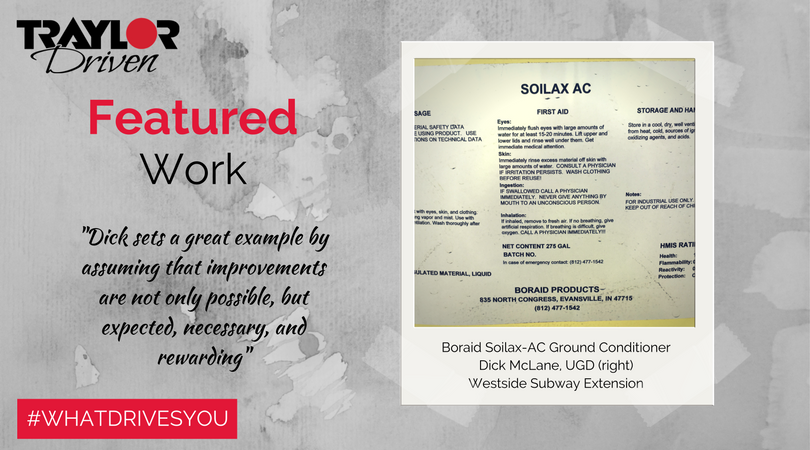 Our June Featured Work focuses on Boraid, Traylor’s very own line of ground conditioning agents. Dick McLane, Underground Division Project Engineer on the Regional Connector and the Westside Subway Extension, has played a key role in the development and distribution of the products.

On the South Bay Ocean Outfall project in San Diego (1995-1999), TBI teamed with Obayashi, Japanese tunnel contractors who had developed soil conditioners to treat ground specifically for earth pressure balance (EPB) mining. Recognizing the value of this innovation, then-Underground Division Manager George Williamson obtained samples of the soil conditioners (surfactant, cellulose, and polymer) and searched for suitable substitutes that could be sourced in the U.S. He found a local chemical company that could perform chemical analysis and batch the conditioning agents. However, the company did not have a distribution license. As a result, TBI created Boraid to provide the licensing to distribute the ground conditioners to TBI joint ventures. George and Underground Division Chief Estimator Mike Roach extensively tested the conditioners for use on the Northeast Interceptor Sewer project in Los Angeles (2002-2006).

The University Link Light Rail U220 Tunnel in Seattle (2010-2013) was mined in ground with the potential for high stickiness of the muck. Dick, as Senior Mechanical Engineer, decided to resurrect George and Mike’s testing procedures using TBI’s current line of soil conditioners, as well as new products from other vendors. The testing showed anti-clay agents were effective in preventing clays from becoming sticky. Dick then tested new anti-clay agents that could be batched by the chemical mixing company and distributed by Boraid. The Boraid anti-clay agent that Dick developed proved superior, as it was more concentrated than the other products, saving our projects a considerable amount of money.

With the new Boraid Soilax-AC (anti-clay) and new ground conditioning techniques, the U220 TBM advanced at a very high average rate of 75 feet per day through the clay. The same product was then used at the Blue Plains Tunnel in Washington, DC (2011-2016) and is currently being used at the Regional Connector Transit Project in Los Angeles (2014-present) with similar results.

The latest Boraid project Dick is working on is for the TBM backfill grout system. Backfill grout consists of two components: A-Solution and B-Solution. B-Solution, sodium silicate, is the accelerator. A-Solution is a combination of cement, flyash, bentonite, water, and a stabilizer. Dick is working on creating new stabilizers that can be batched in-house at about one-fifth of market cost. This vertical integration is what keeps TBI ahead of the pack.

“Dick is constantly looking for ways to improve everything we do. The development of the new Boraid ground conditioning products is just one of the many examples of innovation Dick has championed and executed. He sets a great example by assuming that improvements are not only possible, but expected, necessary, and rewarding.” – Chris Hebert, Underground Division Manager 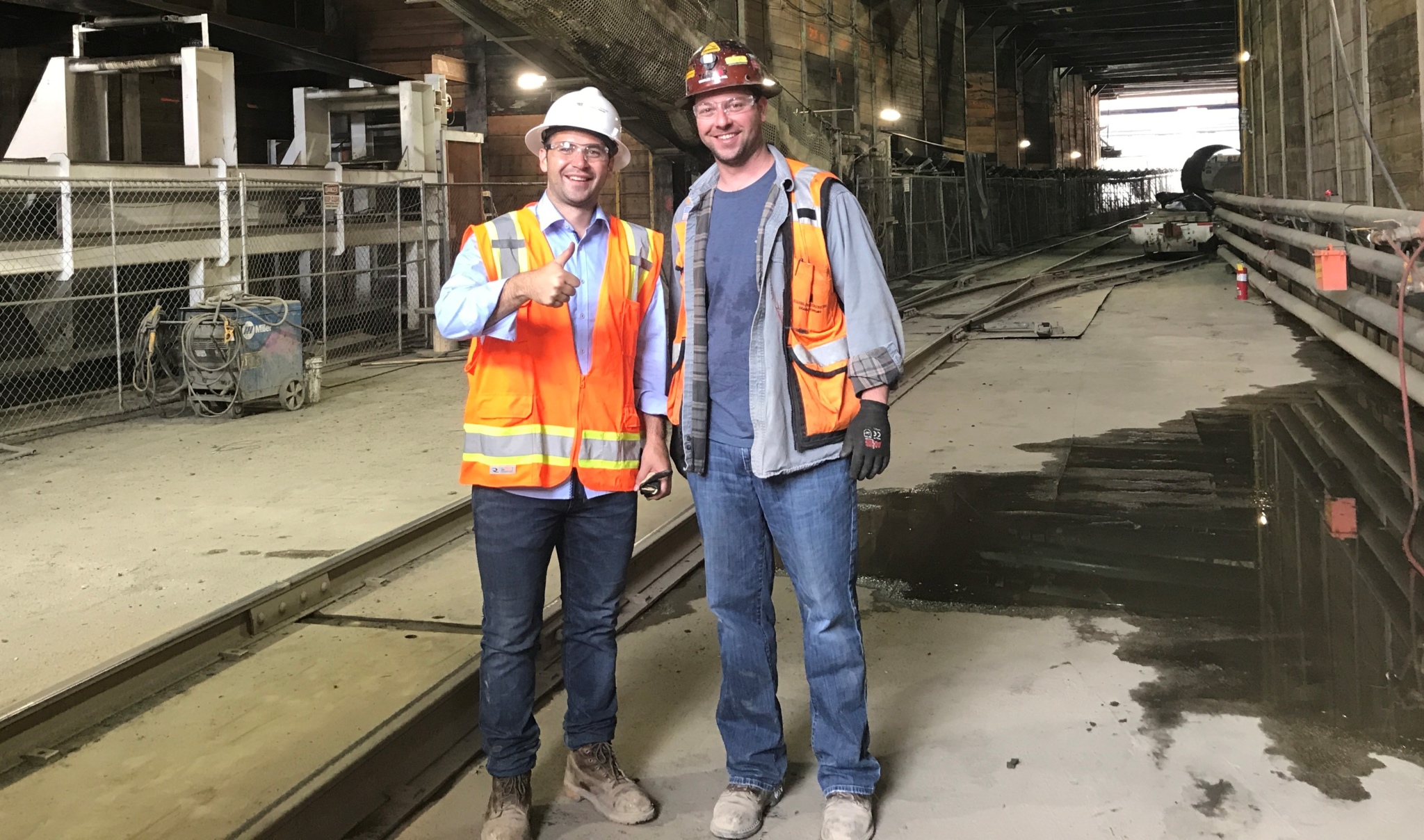 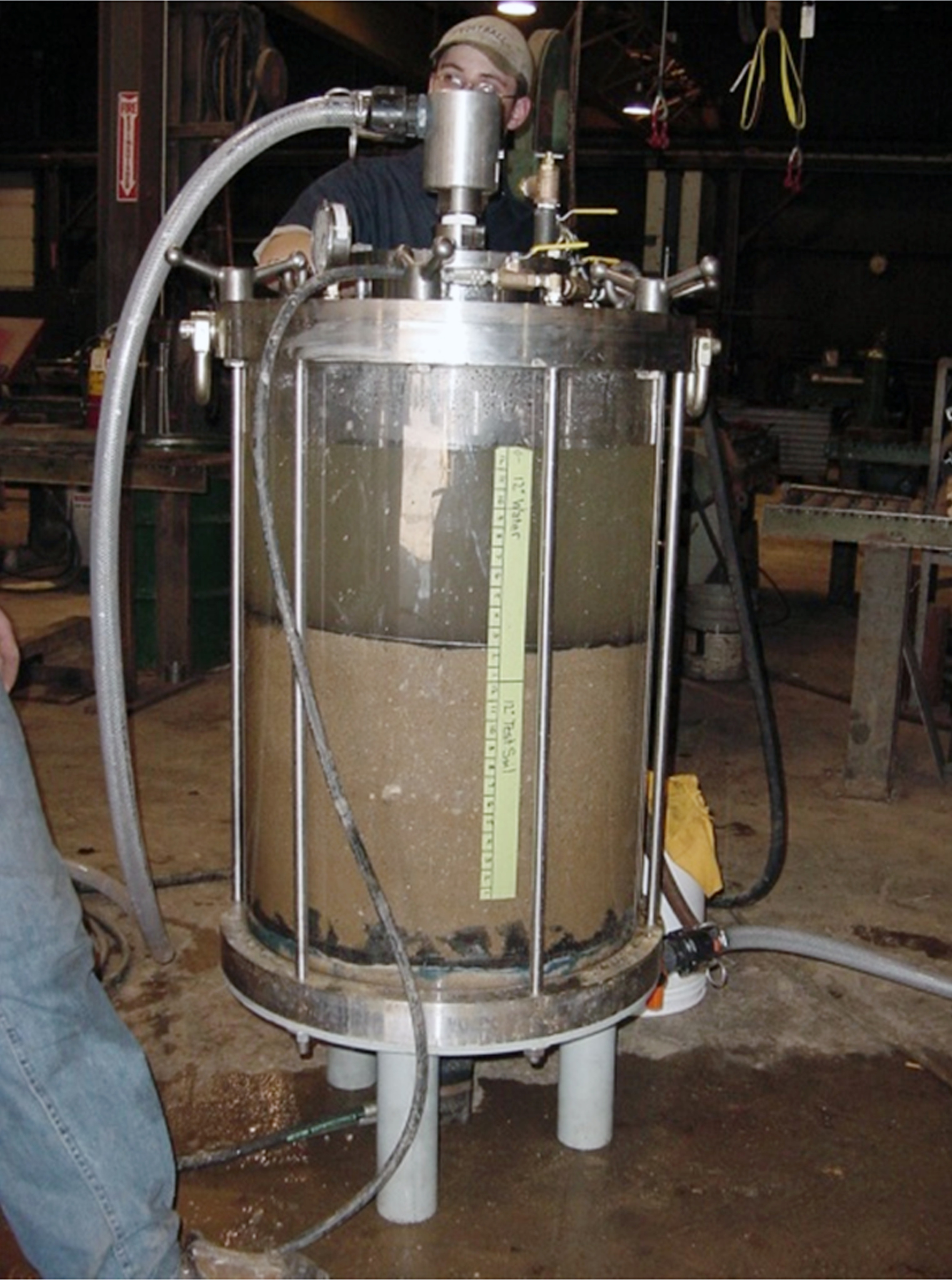 Left: Dick McLane (at right) on site at the Regional Connector project in Los Angeles. Right: extensive testing is a critical part of the development of new and improved products.

TBI: Tell us about your role on the Regional Connector project and what specifically you’ve enjoyed about it.

DM: When I am not working, I am working! When we are tunneling, the addictiveness never stops, especially since we can watch what’s happening with the TBM live on our iPhone. On a serious note, I enjoy playing baseball with my boys, camping, skiing, boating, beach, etc. I also enjoy building in my shop, both wood and metal working. I refuse to buy something I can build.

DM: I’m a workaholic. Some people watch sports, some people are into cars. I like building/constructing/creating/solving problems and puzzles.